The chamomile plant, also known as wild chamomile, is one of the oldest used medicinal plants. It grows everywhere, at the sides of the roads, on fields, near the houses. In some regions, fields of chamomile lie. The flowers - Flores Chamomile- contain volatile oil, blue-colored, with antispasmodic, disinfectant and anti inflammatory characteristics.

Thanks to these characteristics, the chamomile infusion calms the stomach spasms provoked by the gastritis and colitis. The azulene in chamomile oil have a favorable effect in some allergies. Its antiseptic and antibacterial characteristics are very appreciated in scientific medicine. Chamomile infusion is good against diarrhea and other stomach affections and those of the intestines. It works even in liver problems. Chamomile tea, together with anise or foeniculum is given to children in order for these to calm the colitis and eliminate the gas. In cases of flu or cold, chamomile tea provokes sweating, which makes fever lower.

Some sapping eczemas are ameliorated if pulverized chamomile flowers are strewed over them. Hair washed with chamomile acquires a silky look at the same time and it strengthens its roots. It also calms red and inflames skin.

New research has proved that sieved chamomile flowers, with their stalks and receptacles removed, are more effective than the whole flowers. This is because the small cells filled with volatile oil which contain azalea are fixed only on these small flowers, which are removed from the receptacles during the sieve. Also, their flavones level is higher in tubular flowers than in whole ones.

The chamomile infusion is prepared by adding a cup of boiling water to one or two tea spoons of whole or sieved flowers. Another method is this: macerate one or two tea spoons of flowers in a half a cup of cold water, for 30 minutes. Percolate the liquid and then put it aside. Over the remaining flowers pour half a cup of boiling water and leave it for 15 minutes. Percolate and mix both liquids. Through this procedure most of the flowers active elements are extracted.

For baths, put in a satchel one or two handfuls of pulverized flowers, over which you pour boiling water. You leave it this way until the bath reaches the normal body temperature, then you use it as you wish.

For burns, chamomile can be used as oil, prepared like this: 10 grams of sieved flowers (two spoons) are moistened with a spoon of alcohol. After a few hours add to this content 100 grams of sunflower and heat it in the water bath (a recipient filled with water in which you put the recipient with the chamomile) for 2-3 hours until the alcohol is vaporized. During this time mix the oil often. Percolate and squeeze. Keep the obtained oil in colored bottles at low temperatures. Some authors recommend against headache 1 gram of pulverized chamomile flowers, a couple of hours after a meal. 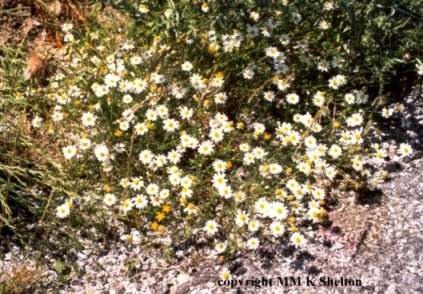 In the case of stomach distension, a chamomile tea prepared after this formula is recommended: chamomile and finical, two spoons of each, round dock and sweet wood roots, and mint leaves, 4 spoons of each. Out of this mix take 2 spoons and add 2 gasses of water. After 15 minutes percolate the liquid and ad sugar. Drink during the day a quarter glass of tea.

For gastritis and enteritis the following plant mix can be used: chamomile, milfoil, wormwood, mind and garden sage. Make an infusion out of this mix with a glass of water. Leave it for 15 minutes, then percolate the liquid and drink without adding sugar, on an empty stomach, during 1 day in two stages.

For the amelioration of pains caused by difficult menstruation, a tea from 40 grams of chamomile, 30 grams of mint leaves and 30 grams of odolean is recommended. Boil one spoon from this mix of plants in a cup of water. After cooling percolate, add sugar and drink 2-3 cups of tea per day.

Chamomile flowers can be found in the composition of tea against colics for adults and children, gastric, sudorific and throat wash teas and other cosmetic products.

Chamomile find out more about herbs on www.liveandfeel.com