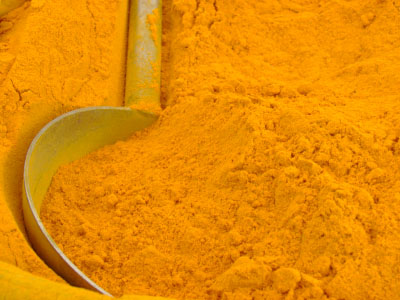 From the rhizomes (root) of this perennial plant found in India, come the highly valued turmeric health benefits. However, turmeric has other talents besides being used for medicine. Turmeric is a fairly new arrival to most Americans spice racks, but it's been a mainstay flavoring spice of Indian curries for thousands of years. In addition to its role as a flavoring spice, turmeric has a long history of use in India's Ayurvedic medicine.

Indeed, its arrival here is good news because studies with animals show that this herb has an impressive array of medicinal uses. So, without further adieu, let's delve into turmeric health benefits.

First, it's important to note that turmeric's chief constituent is known as curcumin. However, it also contains volatile oils, which also harbors medicinal effects.

That said, let's move on to this herbs health benefits.

Turmeric has created a lot of excitement in the natural world of medicine. It's a potent antioxidant and a powerhouse anti-inflammatory agent. Antioxidants work by neutralizing free radicals, which are highly unstable destructive oxygen molecules that can damage cells if left unchecked. Put simply, antioxidants protect the body from the continuous onslaught of free radicals that many experts believe are responsible for premature aging and most diseases, including cancer, heart disease, cataracts, and arthritis if left unchecked.

If you suffer from arthritis, turmeric health benefits may be of interest to you. Turmeric is prized for its ability to fight arthritis. Turmeric is often found in arthritis supplements to help mitigate pain and inflammation. More specifically, test-tube and laboratory studies have confirmed turmeric exhibits anti-inflammatory and anti-arthritic activity. In addition to arthritis, turmeric may be helpful for other inflammatory conditions such as carpal tunnel syndrome and joint inflammation.

Many people have specifically expressed an interest about turmeric for tumors. Turmeric is currently being researched for its effects on different types of cancerous tumors. In fact, many laboratory studies have shown that turmeric has anti-cancer activity. In animal studies, turmeric (curcumin) has been shown to prevent a number of cancers. According to our research, evidence suggests via laboratory data that turmeric (curcumin) can inhibit tumor initiation, promotion, invasion, angiogenesis (growth of new tumor blood vessels), and metastasis (uncontrolled spread).

Indeed, the evidence from laboratory data, meaning animal and laboratory studies suggests that turmeric (curcumin) has potential in the treatment of various forms of cancer, including prostate, breast, skin, and colon. In addition, turmeric is touted as a cancer protective herb because antioxidants help prevent the cell damage that sets the stage for cancer.

Turmeric health benefits may be of benefit to heart disease prevention. According to the well renowned tome "The Pill Book Guide to Natural Medicines" written by Michael Murray N.D. who states:

Turmeric's volatile oils is said to have external anti-bacterial action. As such, it may help prevent bacterial wound infections.

The herb also stimulates the production of bile, which helps digest fats. In addition, turmeric has shown in animal studies to have a protective effect on the liver such as protecting the liver from many toxins.

May be helpful for indigestion and heartburn. It is used for improved liver function. May help prevent cataracts due to its antioxidant properties.

Cindy Amorin is the chief editor of Nutritional-Supplement-Educational-Centre.com, an information-rich site that discusses nutritional, dietary, and herbal supplements and their potential therapeutic value. She is the editor of turmeric benefits a section of Nutritional-Supplement-Educational-Centre discussing the health benefits of turmeric, including tips on how to buy a quality supplement.

For those of you interested in learning how to buy a quality turmeric supplement, meet us on the web at our turmeric benefits web page.