There is a special place that I go in my mind. It is the field in front of my grandmother's house full of chamomile flowers - white petals with yellow centers and an unmistakable fragrance that permeates the air in the afternoon sun. I used to walk through this thick field and pick the flowers to feed the obliging horses in the next pasture. What I did not know then but know now is that these chamomile flowers were botanically known as German chamomile. There are only two-types of plants that are considered true chamomile - German chamomile (Matricaria recutita) and Roman chamomile (Anthemis nobilis). Both plants are in the Asteraceae family. Although described as similar, their differences are evident morphologically as well as in their essential oil appearance (more so than in their alcohol extracts or teas). German chamomile is a low growing (up to 0.6 meters) annual herb with daisy-like flowers on a single stem and native to Europe. Roman chamomile however is a perennial plant growing up to 3 feet tall with daisy-like flowers on branched stems and also native to Europe (Western Europe).

The chemical profiles of German and Roman chamomile used in aromatherapy are rather different. Matricaria has active ingredients of (-) alpha-bisabolol, chamazulene and sesquiterpenes (a 15 carbon atom molecule). Within Matricaria itself there are four chemotypes (specific chemical profile) of German chamomile. Of these, the (-) alpha-bisabolol type is considered to be the most potent in its effectiveness and has been the most widely researched. It is the chamazulene and alpha-bisabolol which are largely responsible for Matricaria's strong anti-inflammatory and antiallergenic properties. The chemical profile of Anthemis on the other hand is mostly esters (up to 80%) such as alpha-pinene, camphene and beta-pinene. These esters provide Anthemis with mainly antispasmodic (to relieve spasms and cramps) and sedative properties, as well as mild anti-inflammatory properties.

Extraction of the essential oil of both plants is through steam or CO2 distillation. In order to extract the highest content of essential oil, harvest is usually at the beginning of the flowering season. As mentioned above, their essential oil distillates are noticeably different. Matricaria has a strong, aromatic smell with dark blue (due to chamazulene content) somewhat viscous oil. Anthemis essential oil is pale-yellow in color and has a sweet, fruity, herbaceous fragrance. Of the two species, German chamomile is the more familiar and more commonly used. Therapeutic Uses over the Years

This rather common European flowering plant has been regarded by many around the world as having a multiplicity of therapeutic uses, and has enjoyed popularity among herbalists for centuries. As stated earlier, German chamomile is the most well-known and therefore the more frequently used, yet each of these herbs have been used since antiquity for digestive disorders and skin and mucous membrane irritations. Both are also considered one of the gentlest of essential oils and particularly beneficial for treating ailments of children. (For a more complete understanding of their extensive uses, refer to Salvatore Battaglia's book The Complete Guide to Aromatherapy.)

Roman chamomile stands out for its sedative properties. According the University of Maryland Medical Center website, sedation is the most popular use for chamomile in the United States. Studies to investigate this claim in humans are few; however, animal studies indicate that low doses of chamomile may relieve anxiety, while higher doses promote sleep. Interestingly, it has been noted that the white-headed flowers of Anthemis have more sedative potential than the classic yellow-headed flowers. White-headed varieties were found in a chemical analysis study to contain more angelic esters than the yellow variety. Esters are known for their calming properties.

What Scientists Are Noticing

As scientists scour the plant kingdom for solutions to ever rising medical solutions, chamomile crude extracts and its constituents have had recent attention. According to the University of Maryland Medical Center studies (conducted on animals such as mice) have shown that German chamomile reduces inflammation, speeds wound healing, reduces muscle spasms, and serves as a mild sedative to help with sleep. In general, in vitro studies have also shown that chamomile has antibacterial, antifungal, and antiviral properties. In just the last five years studies have revealed new information about chamomile properties of inflammation inhibition to reduction in ADHD symptoms.

In the last few years, there has been heightened awareness by the health science community that inflammation is the root cause of most diseases. Just last year, a study conducted by the Case Western Reserve University & University Hospitals Case Medical Center in Cleveland, Ohio (Life Sciences 2009 Nov 4; 85(19-20): 663-9) looked at the effects of chamomile on inducible cyclooxygenase (COX-2) which has been associated with causing inflammation and carcinogenesis. Researchers found that chamomile inhibited COX-2 enzyme activity and acted similar to non-steroidal anti-inflammatory drugs. Researchers stated that such findings add a novel aspect to the profile of chamomile and its preventative uses.

The treatment of diseases with conventional drugs is rather tricky and sometimes a gamble due to the human pathways that metabolize the drugs. This is quite the case when it comes to drug interaction. A study conducted by the University of Innsbruck, Austria (Life Sciences 2006 Jan 18: 78(8): 856-61) looked at inhibitory effect of chamomile essential oil and its major constituents on four selected human cytochrome P450 enzymes (CYP1A2, CYP2C9, CYP2D6 and CYP3A4). In vitro results of this study found that chamomile was able to inhibit activities of major human drug metabolizing enzymes. This is quite useful for assisting with drug interactions and helping to eliminate unwanted side-effects. 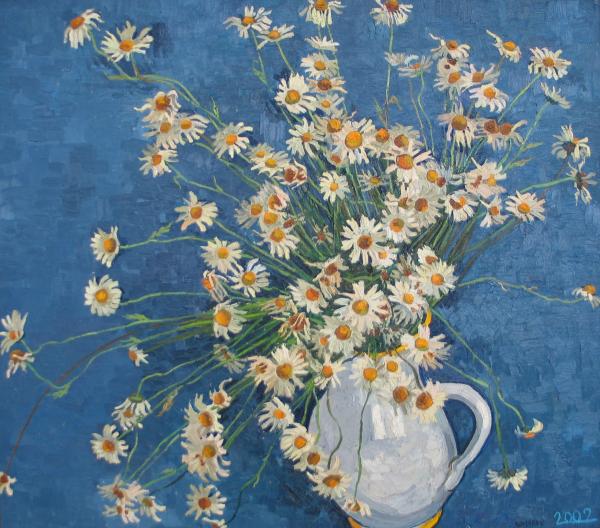 Much concern has been raised about increasing numbers of children diagnosed with attention-deficit hyperactivity disorder (ADHD). According to the Center for Disease Control 4.5 million children 5-17 years of age have been diagnosed with ADHD as of 2006; diagnosis of ADHD increased an average of 3% per year from 1997 to 2006. Treatment of ADHD usually relies upon drug therapy, yet such treatment is not always helpful for young people when considering their developing brains and other internal organs. A study conducted by the Regional Hospital Bozen in Italy (Phytomedicine 2009 Apr; 16(4): 284-6) found that chamomile (Matricaria chamomilla) was able to reduce the symptoms of ADHD (such as hyperactivity, inattention and immaturity) in three young males ages 14-16. Although the sample size is small, this study is an indication that medical science is looking for alternative, safer treatments such as chamomile.

With a little help from chemical analysis of German and Roman chamomile, one can identify the various chemical components that make them similar yet unique. Many of the uses for chamomile are shared between both German and Roman, yet it is the German that is known for its powerful anti-inflammatory properties and the Roman for its sedative properties. Either way, chamomile is considered one of the gentlest essential oils and is especially helpful in treating illnesses found in children. Recent science literature indicates that chamomile has noticeable properties to inhibit inflammation, assist with drug therapy absorption and interactions, as well as a possible aid in decreasing ADHD in young people. So, whether you are looking to relax with a nice cup of chamomile tea or rub some chamomile essential oil on irritated skin or tired feet, it might just be what the doctor ordered.

The author is an aromatherapist interested in promoting the medicinal uses of essential oils in the Western world. He is a consultant for Ananda Aromatherapy, a distributor of pure therapeutic grade essential oils, and Synergy Essential Oils, an outlet for professional grade aromatherapy supplies.