Okra is used for? Diabetes. 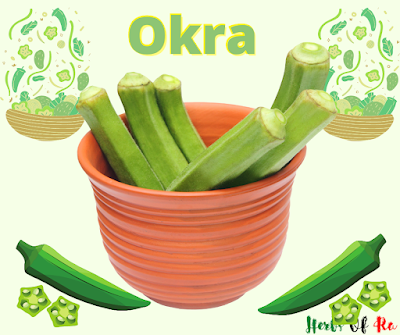 The vast occurrence of primitive types and wild relatives in Africa (especially Ethiopia, Nigeria,  Cameroon, and Ghana) indicates that okra is certainly African. It is, however, widespread in tropical, subtropical, and warm temperate regions but is particularly popular in West Africa, India, the  Philippines, Thailand, and Brazil. The common okra, Abelmoschus esculentus, grows in the whole  of tropical Africa, whereas West African okra, Abelmoschus manihot (L.) Medik [synonyms: A.  caillei (A.Chev.) Stevels; A. pseudomanihot DC. Endl; A. platidactylus (Bakh.) Nakai; and Hibiscus  manihot] is a cultigen occurring mainly in West and Central Africa. It has been reported from  Guinea to Nigeria in West Africa; in Cameroon, Gabon, and the Democratic Republic (DR) of the  Congo in Central Africa; and in Uganda in East Africa.

Ethnomedicinal Uses — The immature fruits and the leaves are eaten in various ways. Fruits,  fresh or sliced and dried, are used for soups (West African draw-soup), also fried in oil. Leaves  are used as a potherb. Young shoots are also eaten. The mucilage is used medicinally and technically as an industrial raw material. A decoction of the immature okra fruits is demulcent, diuretic,  and emollient. It is also used in the treatment of catarrhal infections, ardor urinae, dysuria, and  gonorrhea. It has been used as a plasma replacement or blood volume expander. The seeds usually  obtained from mature and hard capsules are antispasmodic, cordial, and stimulant. An infusion of  the roasted seeds has sudorific properties. Leaves are sometimes used as a basis for poultices; as an  emollient, sudorific or antiscorbutic; and to treat dysuria.

Pharmacological Studies — Because of its high nutrient value, okra is considered a good  source for food fortification strategies. Okra has also been used in the management of duodenal  ulcers and diabetes. The glycosylated molecules found in the okra mucilage have been related to the  inhibition of adhesion of Helicobacter pylori to human gastric mucosa. Such molecules could also  contribute to glucose entrapment and alpha-glucosidase inhibition, which might be advantageous  in the management of diabetes. The fruit and the leaves have antioxidant properties. It has been  observed that the distribution of phenolics in methanolic extracts of okra correlates with distribution  of antioxidant activity. Studies have also shown that roasting of okra seed flour at 160°C for up to  40 min caused an increase in antioxidant activity, as determined by free-radical scavenging using  the DDPH (2,2-Diphenyl-1-picrylhydrazyl) assay.4 A methanolic extract of okra seeds was shown to  have antioxidant activity, as evidenced by several criteria, and to exert antihypoxic activity in two  mouse models