What is Cancer Incidence, Diagnosis, Causation, Symptoms, Treatment and Prognosis

Cancer is second only to cardiovascular disease as the leading cause of death in the Western world. Although Cancer is primarily a disease of the elderly with more than 60% of deaths from cancer occurring in those over the age of 65, cancer can strike even the youngest of children.

Cancer appears to occur when the growth of cells in the body is out of control and cells divide too rapidly. Cancer can develop in almost any organ or tissue, such as the lung, colon, breast, skin, bones, or nerve tissue.

Most common sites are:

The cause of Cancer is believed to be a combination of genetic factors and outside carcinogens such as tobacco, viruses, infection, asbestos, vinyl chloride, inappropriate diet.

Cancer often has no specific symptoms, so it is important that you limit your risk factors and undergo appropriate cancer screening. The signs and symptoms will depend on where the cancer is, the size of the cancer, and how much it affects the nearby organs or structures.

If a cancer spreads (metastasizes), then symptoms may appear in different parts of the body. As a cancer grows, it begins to push on nearby organs, blood vessels, and nerves. If the cancer is in a critical area, such as certain parts of the brain, even the smallest tumor can cause early symptoms.

But sometimes cancers start in places where it does not cause any symptoms until the cancer has grown quite large. Pancreatic cancers, for example, do not usually grow large enough to be felt from the outside of the body. By the time a pancreatic cancer causes these signs or symptoms, it has usually reached an advanced stage.

A cancer may also cause symptoms common to many other problems, such as; fever, fatigue and weight loss. This may be because the cancer uses up much of the body's energy or it may cause the release of substances which affect metabolism.

It is important to know what some of the general (non-specific) signs and symptoms of cancer are, but remember that having any of these does not mean that you have cancer.

Most cancers can be treated and some cured, depending on the specific type, location, and stage. The earlier the cancer is found, the better the prognosis.

A good example of the importance of finding cancer early is melanoma skin cancer. Skin cancer can be easy to remove if it has not grown deep into the skin, and the 5-year survival rate (percentage of people living at least 5 years after diagnosis) at this stage is nearly 100%.

Screening for breast cancer with mammograms has been shown to reduce the average stage of diagnosis of breast cancer in a population. Colorectal cancer can be detected through fecal occult blood testing and colonoscopy, which reduces both colon cancer incidence and mortality, presumably through the detection and removal of pre-malignant polyps. Similarly, cervical cytology testing (using the Pap smear) leads to the identification and excision of precancerous lesions.

Testicular self-examination is recommended for men beginning at the age of 15 years to detect testicular cancer. 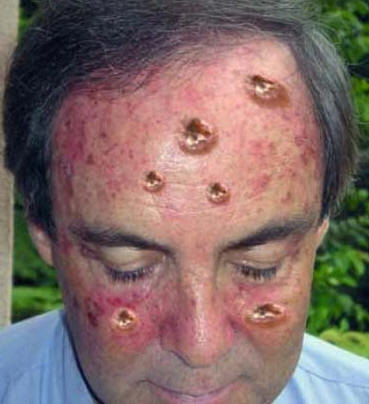 Pain may be an early symptom with some cancers such as bone cancers or testicular cancer.

Long-term constipation, diarrhea, or a change in the size of the stool may be a sign of colon cancer.

Pain with urination, blood in the urine, or a change in bladder function (such as more frequent or less frequent urination) could be related to bladder or prostate cancer.

Skin cancers may bleed and look like sores that do not heal.

A long-lasting sore in the mouth could be an oral cancer and should be dealt with right away, especially in patients who smoke, chew tobacco, or frequently drink alcohol.

Sores on the penis or vagina may either be signs of infection or an early cancer, and should not be overlooked.

Unusual bleeding can happen in either early or advanced cancer.

Blood in the sputum (phlegm) may be a sign of lung cancer.

Blood in the stool (or a dark or black stool) could be a sign of colon or rectal cancer.

Blood in the urine may be a sign of bladder or kidney cancer.

A bloody discharge from the nipple may be a sign of breast cancer.

Many cancers can be felt through the skin, mostly in the breast, testicle, lymph nodes (glands), and the soft tissues of the body. A lump or thickening may be an early or late sign of cancer.

While they commonly have other causes, indigestion or swallowing problems may be a sign of cancer of the esophagus, stomach, or pharynx (throat).

A cough that does not go away may be a sign of lung cancer.

A cancer may be suspected for a variety of reasons, but the definitive diagnosis of most malignancies must be confirmed by histological examination of the cancerous cells by a pathologist.

Once diagnosed, cancer is usually treated with a combination of surgery, chemotherapy and radiotherapy.

Most forms of chemotherapy target all rapidly dividing cells and are not specific for cancer cells, although some degree of specificity may come from the inability of many cancer cells to repair DNA damage, while normal cells generally can.

Contemporary methods for generating an immune response against tumours include intravesical BCG immunotherapy for superficial bladder cancer, and use of interferons and other cytokines to induce an immune response in renal cell carcinoma and melanoma patients.

Pain medication, such as morphine and oxycodone, and anti-emetics, drugs to suppress nausea and vomiting, are very commonly used in patients with cancer-related symptoms. transmission and disease.

Advances in cancer research have made a vaccine designed to prevent cancer available. The vaccine protects against four HPV types, which together cause 70% of cervical cancers and 90% of genital warts.

The consensus on diet and cancer is that obesity increases the risk of developing cancer. The cancer-fighting components of food are also proving to be more numerous and varied than previously understood, so patients are increasingly being advised to consume fresh, unprocessed fruits and vegetables for maximal health benefits.

Dick Aronson has been involved in the healthcare industry for 35 years.He has written numerous articles on the subject and runs a number of informative websites, visit: http://www.life-wave-patches.com and http://www.healthinnovationsonline.com