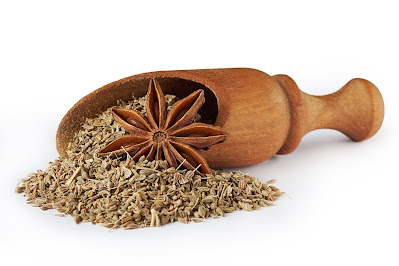 If you lived in the 16th century you would think mice if you heard the word anise. The feathery appearance of the leaves attracted mice like cheese. In the 7th century it was used for coughs, the Romans used it to cure bad breath, in the 14th century a tax was levied on the herb due to its popularity.

The flower of anise is a small yellowish white petal umbel. The part of the herb that is used in both culinary and medicinal applications is the fruit which is a flat, oval seed that is gray to brown in color.

Native only to Egypt and the Mediterranean region, this herb has a long reputation of being a digestive aid. It is now cultivated in almost every region of the world. A simple tea made of the the crushed seeds works well to not only aid in digestion but stop the flatulence that sometimes is associated. It is a pleasant way to end any meal.

It is also used as an expectorant and mild antimicrobial which is why today in many of the over the counter products, one of the main ingredients is anise. It is the essential oil of the seed that has proven to react on the secretory cells of the respiratory tract. The flavor of anise is licorice which gives the medicinal benefits an added bonus.

It should be noted that although not proven scientifically, those with high blood pressure should avoid anise. In some people it has been shown to increase the blood pressure.

For the most part however, this herb is used as a flavoring in culinary dishes as well as in liqueurs.

It is a great herb for aromatic therapy. It was widely cultivated by the Romans for its fragrance and was used in soaps, oils, and mouth fresheners. Take whole seeds and place them in a sachet to flood your senses of the light fragrance. The seeds are ground up often and added to natural toothpastes and mouthwashes to aid in the flavoring.

Some believe that the tradition of the wedding cake in history relates back to anise. After a wedding feast anise tea and cake was served by the Romans. Another interesting fact that is not well known about anise is that as catnip is to cats, anise is to dogs.