The Benefits of Zeaxanthin Can Promote Good Vision 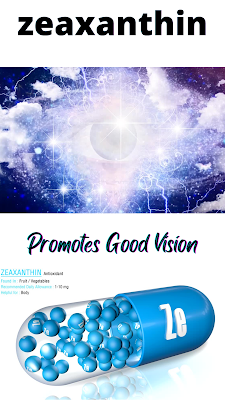 Zeaxanthin is a type of organic pigment called carotenoid. It is comparable to vitamin A and is found in the human eye (macula and retina) together with lutein.
Zeaxanthin is thought to act as a light barrier, protecting the tissues of the eye from sun damage. Foods rich in zeaxanthin include eggs, oranges, grapes, corn, goji berries, mango, orange pepper and other fruits and vegetables.
People use zeaxanthin for age-related vision loss. It is also used for eye strain, mental decline, heart disease, breast cancer, cataracts and many other conditions, but there is no good scientific evidence to support these uses.
Eye Benefits of Lutein and Zeaxanthin
It is believed that lutein, zeaxanthin and meso-zeaxanthin in the macular block blue light from reaching the underlying structures of the retina, reducing the risk of oxidative light damage that could lead to macular degeneration (AMD).
Several studies have found that lutein and zeaxanthin either help prevent AMD or slow the progression of the disease;
Based on research published in Nutrition & Metabolism found that a pure supplement containing meso-zeaxanthin, lutein and zeaxanthin effectively increased the optical density of the macular pigment in most eyes. The pigment is believed to protect against the development of macular degeneration.
Studies published in the Journal of Epidemiology, Ophthalmology and Archives of Ophthalmology found that higher levels of pure lutein and zeaxanthin were associated with a lower incidence of AMD.
Two studies published in Ophthalmology and Visual Science found that eyes with more macular pigment are less likely to have or develop macular degeneration.
In research published in the Archives of Biochemistry and Biophysics, the study authors conclude that lutein, zeaxanthin and meso-zeaxanthin filter short-lived light and prevent or reduce free radical formation in the retinal epithelium and choroid. They also add that a mixture of these carotenoids is more effective than any single carotenoid at the same total concentration.
In a study published in the journal Optometry, participants with early AMD who consumed 8 mg of zeaxanthin per day improved their night driving time for a year and improved their visual acuity by an average of 1.5 lines on the eye chart.
Conclusion: It will not hurt to incorporate Zeaxanthin in your diet.
Labels: benefits of zeaxanthin zeaxanthin benefits

5j4oupnxdl said…
Gas is fed through the torch to shield the electrode and molten weld pool. Like most contractor jobs, the project first starts with the drawings and blueprints. As the specialty contractor or project supervisor, this is additionally the place you'd recognize the necessity for a sheet steel fabrication skilled. The blueprints developed by the engineers will determine the sheet steel specs necessary to create the initial drawings that might be sent to the steel store or steel Freediving Weight Belts provider. We create one-of-a-kind custom steel fabrications to your specs. KSM presents meals gear producers and meals processing corporations custom stainless steel fabrication to cGMP requirements for merchandise like carts, guards, tables, conveying techniques and extra.
January 29, 2023 at 7:04 PM